Written by Richard Heuser for the RSDSA blog.

I was at the 76 mile point of a 100 mile bicycle ride in the Delaware Water Gap area of New Jersey going down a a steep incline at about 44 MPH. When I tried to break the handlebars rotated down and I went off the front of the-bike as if I were diving off a diving board. I have a mental picture of being airborne above a shiny guard rail and the thought, “I do not want to hit it” going through my brain. They told me that I skidded about 35 feet on my face and hands, and I woke up under a guard rail. I could not feel my legs. I began to panic. A voice in my head said, “Do not panic – find out what is wrong with you and then do everything you can to get better.” 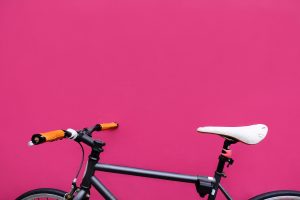 I had a helicopter ride to Morristown Trauma Center where they stitched the wounds and later repaired the broken bones. My hands were like paws from being dragged on the pavement and I had lots of road rash on my legs. I also had a concussion but thank God I was wearing a helmet.

While recuperating at home I went to an orthopedic doctor who started me on physical therapy. The pain in my hands and legs did not go away, but increased. The doctor did not believe that I was doing the prescribed exercises and was unfamiliar with RSD. After researching my condition, my physical therapist suggested that I had RSD and started treatment. Unfortunately, it was pretty late and the RSD was in both of my hands and in one leg. The discomfort was such that if the water from the shower or if someone touched the problem areas, the shock wave and pain would be intense. I called it the “first touch.” Eventually the “first touch” lessened, but it took months even with the desensitizing activities at physical therapy. My hands felt and still feel like they are in a vise.

One of my sons was living in San Antonio, Texas and sent me an article from the newspaper quoting a doctor from there. The doctor’s advice was, “Do not think about the RSD or the pain or discomfort. Do not talk about it, even to you family. Just keep moving ahead, little by little, doing what activities you can.” I followed this advice and recommend it to others with RSD. It is not easy to do, but I believe being active and pushing the envelope worked for me.

The summer after my accident I built a deck off of my kitchen. It took all summer, because using tools was painful, but I did accomplish it!

I still have RSD. I go for acupuncture treatments about once a week. They help. I work as a surveyor doing inside drafting and outside surveying. I have a garden and I still ride a bike, but nothing nearly as fast as September 1995. I know I have RSD, but I try and keep it in the back of my mind. I do not talk about it and try not to think about it. My hope is that the advice I received will work for someone else.

Be Your Own Advocate

Posted On March 4, 2020 ~ 0 Comments
Written by April Ball for the RSDSA blog.  How and when did you develop CRPS/RSD? I had an epidural injection for a herniated disc that…

Posted On June 12, 2020 ~ 0 Comments
Written by Gina Clark for the RSDSA blog. How and when did you develop CRPS/RSD? I was officially diagnosed with CRPS in September 2019. I…

Posted On April 13, 2015 ~ 0 Comments
In the last fifteen years, only two randomized, placebo-controlled trials for CRPS have been conducted in the United States. Sadly, both were unsuccessful. Our optimism…