Fear of Distance- RSD / CRPS and The Journey Away from Home 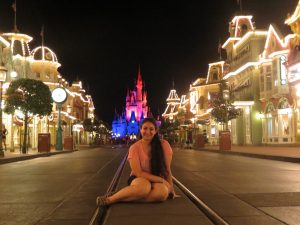 Rachel is a member of the RSD / CRPS community that had the opportunity to be a part of DCP, or the Disney College Program. She details what it is like to be so far away from home, for the first time, with CRPS.

997.2 miles. 997.2 minutes. 16 hours. These are just numbers that form a distance to most people. But when you are living with a chronic illness, 997.2 miles is a long way from home and your comfort zone. That’s exactly what it was for me. In January, I packed up my things and moved from South Jersey to Orlando. I was beginning a journey of a lifetime and starting the Disney College Program.

I suffer from a chronic illness called Reflex Sympathetic Dystrophy (RSD)/ Chronic Regional Pain Syndrome (CRPS). There are many symptoms of this disorder, the most common being extreme pain and hypersensitivity. And with these symptoms come flare-ups where the burning pains gets so intense that it is hard to move.

The Disney College Program is a seven-month internship where you are assigned a role and work at Walt Disney World for that time. My role was in the entertainment division. Going into this program I was scared that my RSD would limit my abilities to work for the company as it has done so previously in regular everyday activities.

So here I was, 997.2 miles away from home, by myself, living with new people who knew nothing about my illness. I couldn’t help but think that whoever I told would judge me or just wouldn’t care or understand. I was unsure I would be able to handle a flare-up in this new environment.

When I was at home and had a flare-up, I would lay down either by myself or I would be with friends who would help me calm down. I also had a more relaxed schedule that allowed me to take time to just wait until the flare ended. There is no time to wait when you work for Disney. I was working up to 10-13 hours a day and around 45 hours a week. The added stress of a new environment and job just provoked my RSD / CRPS causing me to have flare-ups more often. If I were not working I would stay at home and miss out on things with my roommates because I was in too much pain to go out.

At work, I would be on my feet all day. Staying there began to feel impossible for me. I had no idea how I was going to get through 7 months. However, I was so determined not to let my RSD / CRPS control this amazing opportunity that I worked hard and figured out ways to cope with flare-ups in a different way than before.

A common trait that a lot of people with a chronic illness have is that we don’t talk about it to others that much. We often try to keep it hidden, especially from people who are new to our lives. For me personally, it has always been hard to let my guard down and become vulnerable enough to explain my condition to others. I never know how someone will react to it or if they will want to continue to be my friend. Back at home it took my over a year to finally get comfortable with a group of people to tell them about my condition. I didn’t have over a year at Disney.

The first step I took in dealing with a flare-up was to talk to the people who I was constantly around and explain to them my disorder and what they could do when I am having a flare-up. Some people I told wee extremely supportive and I could tell they were legitimately interested in listening to me. However, it was hard when I would tell people and they would act like I was just being over dramatic. I would become extremely self-conscious of my pain around those people. In those moments, I felt defeated and I wanted to quit.

The next step I had to take was to realize that I am stronger than I think. And this is the case for most people. For the longest time, if someone told me I was strong, I would just push it off and tell everyone that “I am not strong, I just have no choice but to live my life as it is”. In a way that is completely true. Living with RSD means living with pain every single day. But I have to continue with life. I refuse to just sit at home all day. So when I had these difficult moments in Florida, I would remind myself that I am strong. I am living my dream despite this disorder.  I would look around at work or at my apartment and just be in disbelief about how far I have come. I would never have imagined being able to move to Florida and work for Disney when I was diagnosed.

The last step I am going to talk about is arguably the hardest. This is an issue that I have struggled with for a while now. This issue is letting myself be vulnerable. I absolutely had to learn how to speak up. There was one night in particular where I was out with friends in the parks and I knew I could no longer walk around. My pain level had increased and I was on the verge of crying. I decided to separate myself and go home. Although I missed out on the rest of the night, I knew that my health was more important. But by doing this, I was really able to learn that I did have friends that cared about me. I spent the rest of the night dealing with my flare-up with a friend who was there for me and helped me through it. My vulnerability definitely came out. I would usually try to stay by myself and act like I don’t need any help. But the truth is, I do.

7 months may seem like an incredibly long time, and it was at certain moments. But I am no longer afraid leaving where I am comfortable and trying new things. Living with a chronic illness makes things harder at times. However, there is no reason why any illness should define what a person is able to accomplish. 997.2 miles seems like nothing now.

Posted On October 18, 2016 ~ 0 Comments
By Guest Blogger Shannon Leidig Greetings everyone!  Happy Autumn! I so cannot believe we are almost to the end of October, which means the cold…

Posted On November 21, 2017 ~ 0 Comments
By RSDSA Board Member, Bob Lane RSDSA welcomes board member Bob Lane to TheTuesdayBurn. Mr. Lane has been a CRPS caregiver, a support group facilitator,…

Posted On November 29, 2017 ~ 0 Comments
By An Anonymous Writer My life truly changed when I was 23 years old. As I look back, I realize that I was in my…