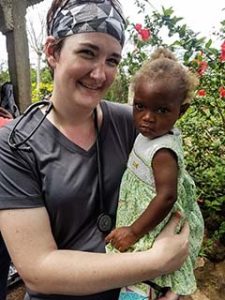 While I grew up in the church and went to Christian school, there were still aspects of my story that God had to redeem. Since middle school, the only consistent prayer in my life was for wisdom, understanding, and that God would finish the good work he had started in me. I knew that I desired my grandfather’s gentle spirit of wisdom. While I didn’t understand in my youth the impact that prayer would have on my life, God was faithful in honoring my request.

I was in a freak accident in junior high. The injury triggered Reflex Sympathetic Dystrophy, one of the most painful conditions the body can endure. Nerves continuously tell your brain that your body is on fire. Patients typically never recover. At thirteen, I was forced to prepare myself for the possibility of losing my ability to walk or use my hands. Instead, I went on to play six years of sports. I had resolved to push through the pain. But when I was placed on a medication contraindicated for my age, a deep depression came over me. My vulnerability was preyed upon and abuse entered the story. My high school years became fraught with self-harm, anorexia, and suicidal thoughts. The pain culminated at seventeen, as I held a gun to my head. But I resolved in that moment, that if the suffering never ended, my life was God’s. I was bought at a high price for his glory.

I went to college broken. I failed out of the first year. I was told that I would never graduate college, let alone be a nurse. Initially denied further classes, I fought for another chance. It was then that God stepped into the mess and miraculously healed me, body and mind. He had completely flipped the script in a matter of weeks. I had perfect health. My grades had gone from F’s to A’s. The horizon looked bright. But after 2 years, I suddenly became sick once more. Fear set in that my college career would suffer another blow. But despite my struggle with extremely complex health, God sustained me.

Dysautonomia one of the most underdiagnosed and politically charged conditions affecting millennials today. Immediately after a diagnosis of POTS, I reached out to all the related medical foundations. I offered to serve in whatever capacity needed. As my junior year ended, God set off a whirlwind chain of events. I was suddenly the assistant director of non-profit foundation. Overnight I had over 30k patients in my charge. I was loaned to another foundation to write two chapters of a book. My name was published completely bare among MDs and PhDs from around the country. Juggling senior year with foundation work kept me completely dependent on God. My university president’s report to the board ultimately included the student they had counted out. But it’s often the disqualified that God qualifies, to ensure no one mistakes their success for a byproduct of their own strength.

I was twenty-three when I graduated. I was promoted to executive director of the largest international foundation of its kind at the time. I suddenly found myself in the same room with healthcare legends. I was blessed with an opportunity to publish again. After accepting a trauma residency at The University of Tennessee Medical Center, I picked up roots and moved to Knoxville. Once there, I quickly found myself occupying leadership roles. I was at what seemed to be the pinnacle of my career.

But as God expanded my experience, my passion shifted focus. I was blessed to get to travel, speaking on matters of healthcare. But I started praying for the opportunity to speak on matters of the heart. As foundation director, part of my job to address suicides within the patient community in my charge. Watching my peers suffering and hopeless weighed heavily on me. I found myself quickly succumbing to burnout.

I suddenly was seriously ill once again, but doctors struggled to discern what was causing it. I had no choice but to resign and move back to Indiana. I lost everything. I left behind my career, dreams, plans, support system, church, friends, mentors, independence, hobbies, full ride to graduate school, and apartment in the Smoky Mountains. Friends passed away. I found myself coming against false accusations and insurmountable stigma. I lost my physicians with my health insurance. I was bankrupt with no health.

I knew God had allowed the trials to derail my life for a purpose. With a crushed heart, I told God to ingrain anything he wanted to teach me because I never wanted to suffer that level of devastating loss again. For two years, I drove enough miles to span the width of the US and back in the desperate search to find a diagnosis and treatment. After a year with no progress, I struggled with the desire to end the suffering once again, knowing heaven lay ahead. But I made a promise to God that my life was his. For a year and half there would be no validation. Then despite having no name for my condition, I was told my heart would eventually go into failure and nerves were starting to die. The profession I had dedicated my life to couldn’t help me. But I knew God was still in control, as I signed a DNR on my 27th birthday.

For months there had been deafening silence from heaven. I had to constantly keep my mind saturated with God’s word. Many days I listened to ten sermons in row, filling in the gaps with worship music. It went from being a means of survival to a deep hunger. I learned how to keep my vision locked on Jesus. Finally, I saw what God had been doing all along. He replaced my spiritual heart, by killing my physical one. When Jesus became all I had left, I discovered he was all I wanted. The prayers and intention of my heart completely changed. I truly became broken over the world, as I began seeing it as he does. I suddenly saw the depth of my relationship with Christ suffering had brought me. He was enough for every need. The waves of desperation turned into a deep river of peace. As I learned to number my days, my purpose was completely redefined. My situation hasn’t changed, but I have faith that I will see restoration. No matter what my future holds, the God I serve was worth it all. I have had a blessed life.

“Whom have I in heaven but you? And earth has nothing I desire besides you. My flesh and my heart may fail, but God is the strength of my heart and my portion forever.” Psalm 73:25-26 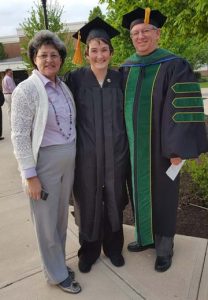 Nerve Pain Is Hard to Explain

Posted On November 10, 2020 ~ 2 Comments
Written by Heather Maerten for the RSDSA blog.  My name is Heather Maerten and I'm a mother of three and a pediatric nurse. How and…

Posted On October 24, 2018 ~ 3 Comments
Written by James W. Broatch, RSDSA’s Executive Vice President, Director I want to reissue my invitation to the RSDSA community to participate in November’s CRPS…

Posted On April 24, 2019 ~ 0 Comments
Written by Tatum Bunnett for the RSDSA blog. “Baby steps” has been my motto for half of my life. At the age of nine, I started…