Published on November 15, 2017 under Stories of Hope 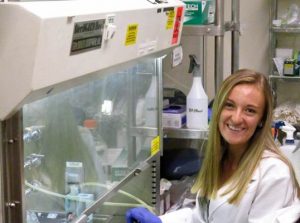 Courtney developed CRPS when she was 14 years old in her right foot; seven years later at age 21, she is now a pre-med student at Gordon College studying biology. Unusual circumstances happened between Courtney’s story and my own.

Courtney and I went to elementary school together in 2006; I then changed school districts as we moved into middle school. Three years later, Courtney was diagnosed and informed that there was another young girl with CRPS in our city. Courtney and I were then reunited by CRPS and went on to connect our families, treatments and therapists. She was the first to enter the Chronic Pain Rehabilitation Program at Cleveland Clinic. My family and I traveled to visit the clinic where Courtney gave me tips and advice for a few weeks later when I would enter the same program. When starting this blog series on young adults, I was incredibly excited to interview Courtney and learn about her current life at college with CRPS.

When you were applying to college, did you have hesitancies because of your pain?

“Not really because since I was little I knew I wanted to go into medicine. Once I was diagnosed, I always said that I will still be a doctor, and this is not going to stop me.”

Has having CRPS influenced your medical career path?

“I knew that somehow my perspective from what I have gone through with all of this, would help me in whatever field I go into. It helps me relate to people better as I work in hospitals.”

Do you have a disabilities plan in college?

“No, my school does not know that I have CRPS but a few of my professors do. I have always had the mindset that I don’t want to be treated differently.”

In your four years at college, have you had any new pain struggles?

“I always said that I will still be a doctor, and this is not going to stop me.”

Currently, Courtney is interning at Harvard’s teaching hospital within allergy and inflammation research. She wants to go on to a type of pediatric specialty after graduating with her bachelor’s degree. Courtney’s pain is still prevalent and a daily struggle, but she is able to function just like anyone else. She discussed with me that, “You become accustomed to whatever you’re dealing with. When you have this pain for a long amount of time, yes it still hurts, but it would be kind of weird if it didn’t hurt. You have to become used to it.” This is almost an anthem for young adults with chronic pain because we have so much life to live and many paths to discover. We can accomplish anything we set our minds to, it just may get done a little differently.

“I recognize it may be harder with CRPS, but I am still going to do it.”

Courtney gives the advice that you have to find what motivates you to get up everyday and do it. She says, “It is why I went to college for pre-med, and why I am going go to the medical program I wanted to. I recognize it may be harder with CRPS, but I am still going to do it.” Courtney and I have stayed close friends, and we continue to support each other in our ongoing adventures.

CRPS Retreats and Gatherings- The Positive Impact of the YA Retreat

Posted On August 29, 2017 ~ 0 Comments
By Guest Blogger Melissa Lanty RSDSA is focusing on how we can better serve the community, especially with November (CRPS Awareness Month) quickly approaching. One…

Posted On May 8, 2015 ~ 0 Comments
Written by Aubrey Haley for the RSDSA blog. In 2013, after living with full body CRPS for almost four years, I was afforded the opportunity…

Posted On June 29, 2015 ~ 0 Comments
Hi there! My name is Katie and I’m the blogger behind Upcycled Treasures and A Handcrafted Wedding. I was diagnosed with CRPS back in August…