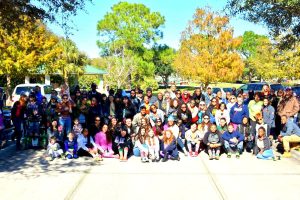 For the past few years, I have participated in Crazy Sock Day. I am a lover of crazy socks and have quite an inventory of them, so every day is Crazy Sock Day for me, but on January 24 it is embraced by the invisible illness community. I had heard it was for a young girl named Melanie who had several of the invisible illnesses that I did. As the years went by, I learned more about this young lady’s story. January 24 is her “painiversary.” To raise awareness and bring a little bit of sunshine to this girl’s life, Crazy Sock Day was started. It quickly took the CRPS Community by storm through the Internet. Five years into Crazy Sock Day, Melanie and her family held the first Crazy Sock Walk. This year, I was lucky enough to attend the second Crazy Sock Walk on the day of the 6th Crazy Sock Day. 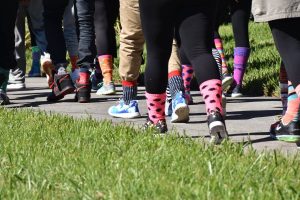 Melbourne, Florida is absolutely beautiful. A sight that was even more beautiful was all of the bright, outrageous socks that were on each person in Westbrook Park when I pulled up to the start of the walk. Thigh highs, knee highs, baby socks, fuzzy socks, every type of sock you could imagine made an appearance on at least one person. Some people wore two socks on each foot to make their socks look even crazier. When you see a large group of people all wearing neon socks blatantly on display, it certainly catches your attention. This year’s walk was dedicated to Hannah Bernard, a CRPS Warrior that left us too soon. 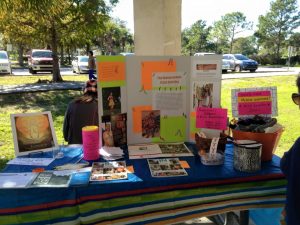 The sidewalk was decorated with chalk and anyone could contribute to it. The first thing to catch your eye was the Crazy Sock Walk chalk design on the ground. As you look around the park, you’d see signs on each side of the sidewalk, every few feet. Each of these signs offered different facts about the different conditions that the Crazy Sock Walk/Crazy Sock Day raises awareness for. CRPS/RSD, EDS, Mito, Gastroparesis, and other invisible illnesses were all being acknowledged. There was a beautiful, professionally made, banner for the Crazy Sock Walk. When you walked beyond that, there was even more going on! To the left, there was an information table for RSDSA and the US Pain Foundation that also featured information about Melanie’s story. There was also a food and drink station and an area for baked goods. Straight ahead there was a silent auction table, primarily featuring photographs taken by Melanie. There was also a raffle table featuring various gift cards from local businesses. To the right, there was a station to design your own crazy sock on paper to hang up as well as a place to play games such as corn hole and hula hoop. 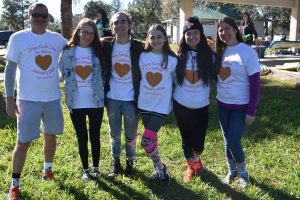 I was instantly greeted by Melanie’s mom, Laurie. Instantly, you felt like you have known her forever. Hugs were given all around and the chatting came naturally. I then met Melanie’s father and the photographer of the day, Shawn. Melanie then came over and greeted me with one of the biggest hugs I have ever gotten. She was excited to show me around and to talk. We both have a love for crazy socks, and she was proud to show off both pairs and tell me what a goose chase it was to get the thigh highs. I then met her sister, Alyssa. Alyssa went to school to become a physical therapist and continues to further her education. She brings as many people with her as possible, most of which she met at school. People traveled from all over Florida to come show their support for Melanie, her family, and to make a difference in the lives of those living with invisible illness. The love and respect Alyssa has for her little sister is obvious. She wants to make a change just as much as Melanie does. Melanie’s brother, Jack,  and grandmother were working the auction and food tables. Everyone in Melanie’s family played a huge part in the success of this event.

Before the walk kicked off, Alyssa and Melanie said a few words, gave out some prizes, and announced the winners of the raffles. The awards were given to people with the best socks. I happened to receive best animal socks and got a golden duck trophy. Super cute and very thoughtful. Walking through Melbourne, we certainly got the attention of the cars around. Everyone made sure their socks were easily seen. It’s hard not to notice a giant group of people with brightly colored, funky socks. It is the perfect way to get someone’s attention and make them ask questions. 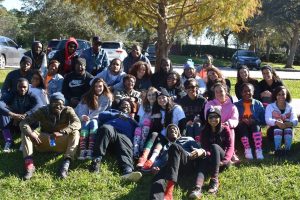 gh my time with the Dickens family was short, I could feel how much they want to make a difference. They are doing such a fantastic job. My Facebook news feed was full of Crazy Sock pictures, even for the people that couldn’t make it to the walk. Awareness is so incredibly important and getting even three people to participate spreads awareness that much more. Those three people can tell another three people each and start a chain reaction. This family acts as a unit and I know they are going to do fantastic things; they already have. Six years of Crazy Sock Days and Melanie is now only 16 years old. Can you imagine what is to come?!

This just goes to show that you can make a difference. No matter how old you are, what your idea is, or where you are in the world, you can do something that will impact the CRPS community. All you need to do is want to make a difference and act on it. I left feeling so inspired and so grateful for being part of such a wonderful community.

We would like to thank Melanie and her family for welcoming us to her walk. We are honored to be a part of her journey. Thank you, Dickens family, for all of your hard work and dedication. We can’t wait to see what is to come in the next few years for both Melanie and Crazy Sock Day. You can buy a t-shirt until the end of January. Buy one here! 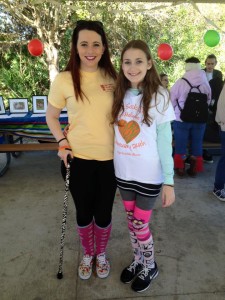 Posted On January 3, 2017 ~ 0 Comments
By Samantha Barrett, Special Events Coordinator Welcome, 2017! So many of us were ready for a new year. With the new year comes expectations of…

Posted On August 2, 2016 ~ 0 Comments
By Sammie Barrett Last year, you may recall that I had my very first camp experience at the Center for Courageous Kids in Scottsville,…

RSDSA Spotlight: How CRPS Taught Me to Live In the Moment

Posted On February 9, 2016 ~ 0 Comments
By Anna Evenosky, Guest Blogger Rewind to that time that is so vague in my head that I can barely remember it. The time of…