Written by Tatum Bunnett for the RSDSA blog. 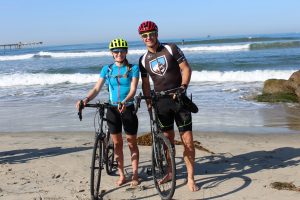 “Baby steps” has been my motto for half of my life. At the age of nine, I started experiencing intense pain in my feet and lower legs. My doctor discovered that I had a congenital birth disorder in which several of my bones in my feet and ankles were fused together. First, a series of casts were used to non-surgically correct the problem; I spent 12 weeks of my fifth-grade year in a wheelchair with casts on both legs. Unfortunately, as a result of this treatment, I developed Complex Regional Pain Syndrome (CRPS).

It was then determined that I needed a series of surgeries to correct the original foot deformity, but my CRPS had to be controlled before the surgeries could take place. The treatment required my mom and me to move to Palo Alto, California. After being on the waiting list for nine weeks, the Lucile Packard Children’s Hospital pain program finally had a spot for me. This intensive and draining eight-week program required eight hours of therapy each day. The pain was excruciating at times, but I realized the only way to make progress in this daunting process was to set small actionable goals each week, – making baby steps towards my recovery.

Once through the program, it was time to tackle the surgeries. Over the next two years, I had 16 hospital procedures and four major surgeries. Through this (what seemed like a never-ending) cycle of surgery, recovery, surgery, etc., I found there was no other option but to keep taking small steps forward – mentally and physically. To most, being able to walk without assistance isn’t a big step, but for me, this felt like a giant leap. It not only meant that I was on the road to recovery, but I was almost ready to have another surgery and one step closer to being able to go back to my family and life. If I didn’t have a positive attitude and continue my therapies, I would not be able to have the next surgery and would have my pain forever. The memory of the pain is fading; however, what I learned through the process will forever shape my thinking.

After these extremely difficult three and a half years I continued to recover and was able to return to my normal life, I graduated high school and started planning for another life-changing journey, a bike ride across the United States of America with my family. I decided to take a gap year before starting college. I wanted to prove to myself and other people living with CRPS that we could fight through the pain. I also wanted to educate others, fundraise, and bring awareness to CRPS. 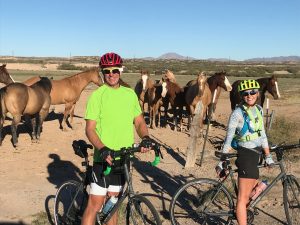 Riding across the USA was a massive endeavor, the plan was to ride from San Diego, California to St. Augustine, Florida. We would ride anywhere from 30 to 90 miles a day with varying terrain. Some days we would have thousands of feet of elevation gain and other days the ride would be flat. Before we started the ride I had only been a recreation cyclist, the first road bike I bought was for this trip. I was far from an advanced road biker. The longest ride I had ever done was 30 miles with very little traffic. To say I was genuinely nervous is an understatement! I didn’t know if I could ride the 3,000 miles to St. Augustine, I also was unsure that my feet would be able to take the intense, strenuous activity every day. To pass the time, my dad and I would play goofy games along the way and enjoyed the always changing scenery; from the plants and animals to the smells and the temperatures. I stayed positive and told myself that I just needed to keep making baby steps.

Like I had predicted, parts of the ride were extremely difficult. My hardest day of riding was climbing up 8,828 feet to the top of Emory Pass in New Mexico. After being delayed two days because of the first frost and snow, I was excited to be back on my bike. The climb took most of the day and the whole time I wasn’t sure I could make to the top, especially since I had never done a climb like this before. I knew that the best way to get to the top was to go in my lowest gear and take as long as I needed. Throughout the climb I never felt weak, I felt my self gaining more and more strength.  After several hours of pedaling, we made it to the top and was elated! I felt happy, I was so proud that I had conquered Emory Pass and didn’t give up! I was even happier with the reward of a 20 mile downhill. Riding through these difficult days made me realize that CRPS made me stronger, not weaker! I am now able to see how far I have come, from the days of not being able to walk to proving to myself that CRPS no longer holds me back or owns my life. 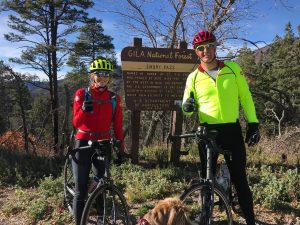 Our average daily ride was about 60 miles a day, which allowed us to stop in many rural towns. We met many amazing giving, kind, and genuine people. All of the people we met wanted to hear about my journey and CRPS. People made us dinner, took us to dance halls, and made donations to RSDSA. On several occasions, I was able to share the difficulties of CRPS and talk with them about my journey, after these conversations many people chose to donate and even followed my blog, tatumbunnett.com.

Throughout the ride, I became stronger, more powerful, and my worries about my feet and CRPS slowly started to drift away. I felt energized by the ride and craved exercise. I knew I could make it to Saint Augustine! Unfortunately, on day 44 of the ride in Kinder, Louisiana, my dad had a really bad crash. He was careflighted to a hospital and had to have surgery for several facial lacerations, He is recovering well. At this point, we weren’t able to continue the ride and we decided to come back to finish it at a later time as we only had two weeks left. Although we didn’t make it to Saint Augustine, we rode 2,163 miles through five states. At the start of the ride, I wasn’t sure I could make it across California, but we made it to Louisiana.

I overcame so many personal and physical challenges! I learned never to give up just because something is hard, but to keep fighting and you’ll come out on top. I also learned that CRPS didn’t make me weaker it made me stronger! It taught me how to overcome any challenge by taking baby steps and staying positive. No matter what the challenge, I am confident there will be more, learning to take that first “baby step” is essential.

Don’t Abandon Your Loved Ones With CRPS

Posted On November 9, 2019 ~ 0 Comments
Written by Jeff Schwartz for the RSDSA blog. How and when did you develop CRPS/RSD? I do not have CRPS, but my wife battles it.…

Posted On January 30, 2019 ~ 0 Comments
By Kristi Oen:  CRPS Conqueror, Founder of P.A.I.N. Help, Vice President of the Naples Holistic Chamber of Commerce Like many people with CRPS, I have…